Although my "religion" doesn't actually practice Lent, I think it's something that each of us should do as a child of God (my personal opinion).  I prayed about what to give up during this season and several things came to mind, but I didn't really feel in my heart that God was asking me to give up those things.
Then, I received this in an e-mail yesterday and realized these are some things that I can give up and would be pleasing to God!!!

Things to Give Up for Lent
(and the rest of the year, too)

GIVE UP grumbling!
Instead, "In everything give thanks."
Constructive criticism is OK, but "moaning, groaning, and complaining" are not Christian disciplines.

GIVE UP looking at other people's worst points.
Instead, concentrate on their BEST points for a change.
We all have faults.
It will be easier for people overlook OUR shortcomings when we overlook THEIRS first.

GIVE UP speaking unkindly.
Instead, let your speech be generous and understanding.
It costs so little to say something kind and uplifting.
Check that sharp tongue at the door.

GIVE UP your hatred of anyone or anything!
Instead, learn the discipline of love.
"Love covers a multitude of sins."

GIVE UP your worries and anxieties!
Instead, trust God with them.
Anxiety is spending emotional energy on something we can do nothing about...like tomorrow!
Live for today and let God's grace be sufficient.

GIVE UP TV one evening a week!
Instead, visit someone who is lonely or sick.
There are those who are isolated by illness or age.
Give someone a precious gift, your time!

GIVE UP buying anything but essentials for yourself!
Instead, give the money to God.
The money you would spend on the luxuries could help someone meet their basic needs.
We are called to be stewards of God's bounty, not consumers. 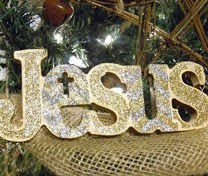