I'm having a birthday later this month and it seems I still have a lot to learn or be reminded of, even as an old(er) lady. I've been reading a book by Dr. Tony Evans,  "30 Days to Overcoming Emotional Strongholds" and it's been an eye-opener for me. As old as I am, I don't feel like I've ever "soared like an eagle" because I've let so many people in my life hold me back. You see, I'm a people-pleaser. I always try to put what other people want and need before myself, but I will stand up for my convictions and beliefs when it comes to a disagreement.  I've discovered - the hard way - that negativity breeds negativity and being around negative people who refuse to change their attitude makes mine turn sour, too, so for my own sanity and spiritual growth, mine is the attitude that has to change - just like I've talked about so much lately.
I recently saw this picture and it spoke so much to my heart.

I don't want to be prideful, but I do want to look in the mirror every morning and instead of seeing a sad old lady,
I want to see who and what God sees.....
a woman of worth.....

a daughter of the KING!

Here's the conclusion to Dr. Evan's book, just in case somebody else needs it, too.

"Once upon a time, an eagle egg was nudged out of its nest and rolled down the side of the mountain, finally coming to a rest in the middle of a turkey farm. Still a little dizzy, a newborn eaglet wiggled out of his broken shell and looked around at the big, wide world. Naturally, the little guy had no idea he was an eagle. As time went by, he concluded that he was just a scrawny, funny-looking turkey. Soon, he began to adopt the mannerisms of those around him. He pecked at the grain in the barnyard, bobbed his head with the best of them, and even managed a pitiful-sounding gobble from time to time. One day, a flock of eagles flew overhead. The young, would-be turkey looked at them longingly, admiring their graceful flight. As he watched them fly by, one of the passing birds glanced down at the barnyard with his sharp eagle eyes, hardly believing what he saw. He swooped down, landed next to the young eaglet and said, “What in the world are you doing here?” “This is where I was born,” the youngster replied. “This is my home.” The great bald eagle snapped back, “This may be where you were born, but your home is in the sky. Don’t you know who you are? Spread out those wings and fly!” Sure enough, the young eaglet extended his wings. A surge of excitement raced through him when he felt himself being lifted skyward. As he left the ground, one of the turkeys caught sight of him and asked, “Where are you going?” “I’m going to be who I was created to be,” he replied. In no time, he was soaring toward the clouds.
God created you to be an eagle, soaring on the wind of His Holy Spirit. He gave you wings strong enough to carry you, steady and sure, through the storms of life. He gave you sharp eyes, capable of focusing clearly on His divine perspective. How tragic to settle for life as a turkey when the open sky awaits you. Yet that is exactly what will happen if you remain in emotional bondage. Rather than live a defeated life, controlled by your disordered thoughts and habits, isn’t it time to live according to what God says about you? He says you have a future full of HOPE. He says you are fearfully and wonderfully made. He says you are loved, you are an overcomer, and you can overwhelmingly conquer all that life throws at you. He says you are His and He will never leave you.
Friend, may your days ahead be greater than your days gone by, and as you learn and apply God’s truths, may they give you the wings to soar high." 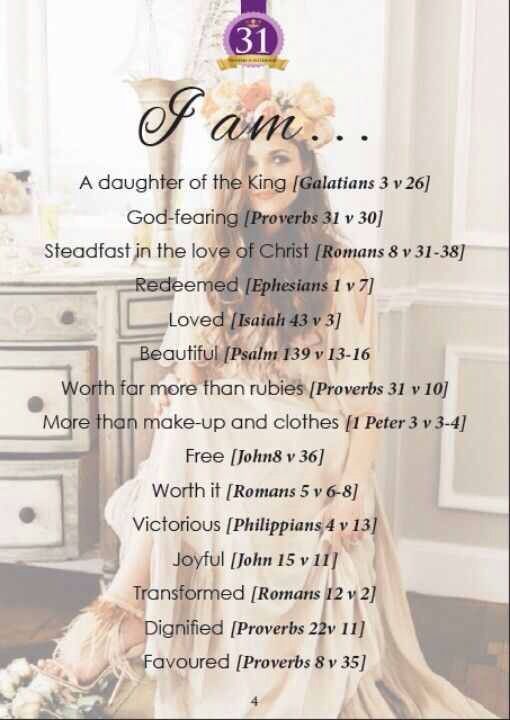