Our youngest GRANDson was diagnosed with a gluten intolerance.
When you ask him about it he says he's not supposed to have foods with "glutton"....which just happens to be one of my least favorite words....and yet another reminder of what the Lord has been speaking to me about lately.

Sometimes, when the Lord is trying to work  on me about something, He interrupts my sleep and that's what He did about a week ago....when each time I woke up I  had on my mind just how much I overeat and turn to food when I know I shouldn't.  In my case, it happens most when I'm tired....at night!!!

Yes, I know that I should be taking care of my "temple"....but I don't.  I often wonder if God convicts the hearts of others about things like this as much as He does me.  Well, it doesn't matter....'cause I'm the one He's talking to about this topic.

After that sleepless night, I felt God calling me to do a bit of research on gluttony....and it was one of those times when I ask,
"Do I have to, Lord?"
"Are you sure?"

Will I ever learn to quit questioning Him about stuff like this?!?!?
Probably not!!!

A glutton is a person who is debased and excessive in his (or, in my case her) eating habits.  Gluttony is more than overeating (ouch)....it describes a life given to excess...(again...OUCH!!!!)

In the Bible, gluttony is right up there with being a drunkard!
(how many ouchies can one girl handle while researching a topic?!?)

Proverbs 23:20
Do not carouse with drunkards or feast with gluttons.

Deuteronomy 21:20
.....this son (daughter) of ours is stubborn and rebellious and refuses to obey.
He is a glutton and a drunkard.

Then, I go and see this picture on Pinterest....

And, God goes and convicts me once again of eating out of a jar of this stuff....
....which I truly tried to quit buying, but our GRANDsons love it
(bad, bad Nannie for blaming the boys) 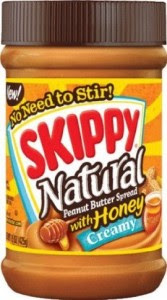 And, then there's that thing about God telling me to walk....
....which I've been doing....
....but my left knee is absolutely throbbing afterwards!!!

And, then I go and question God that if He wants me to walk, why won't He heal my knee?!?!?

Anybody else out there feel my pain....and I don't mean knee pain?!?!?